"My future dream is to become a big enterpreneur to help other vulnerable people in the community." (Ally Nkopano, supported student, small business enterpreneur)

Step 10: We encourage our alumni who have already made steps into independence or into the labour market to make contributions for children in need.

Since beginning of our activities approximately 100 children and teenagers managed to finalize their education.  Through close, personal and individual care and support 98 percent of them have also succeeded in leading an autonomous life. 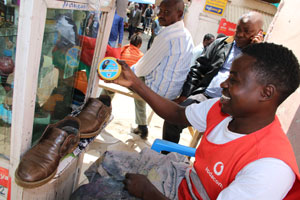 Josef specialized in the preparation of used shoes for further marketing. He can earn his living and also expanded his business into chicken breeding. In our trainings he serves a a role model for other young people.

Many of our former proteges (alumni) contribute to our activities. They tell their stories in our trainings and seminars and serve as role models for our young adults. Based on their own experiences they can demonstrate to the younger participants how to succeed and to stand on own feet.

As soon as our alumni earn money, we ask them for a contribution to our programs. Proteges who received a start-up capital are committed contractually to pay back half of the capital within 10 years. We also take care that our support has a multiplying impact for other members of the families or the society.

Ally Nkopano, 26, was supported over 10 years. First, he completed primary school after both parents died at HIV/AIDS. He was left back in the slums of Arusha together with his younger sister.  This is where our social workers picked him up. We found secure housing for him and his sister Mwahaharusi; they could live in old neighbourhood with the help of remaining relatives.  Ally also completed Secondary School and a subsequent vocational training as an electrician. He then developed distinctive entrepreneurial spirit and made himself independent. Our training in business skills helped him perfect bookkeeping. He now owns and runs a stationery store with printing and scanning services. He has a video games equipment at his disposal which children from the neighbourhood can play with for a few shillings. 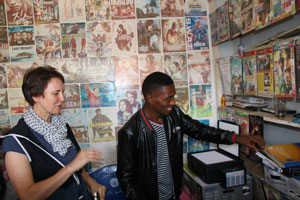 Ally runs his own stationary shop. As a young enterpreneur he is able to sustain on his own and also supports his sister, Mwanaharusi.

Mepokuri, 26, was lucky enough to get an access as Maasai boy to education. His foster father let him attend school because of the insistence of his mother. The grandfather served as a role model as he went to a missionary school. After completing his bachelor in business administration Mepokuri was uncertain what to do – he could continue his studies and complete a master’s program, or he could get a start-up capital to run his own business. He decided in favour of the business and opened a food store close to one of the main roads and to his Maasai village. He is now able to earn his own money and to send his younger sister to school. He also provides his larger family with food supply from his shop - using a small motor bike as delivery mechanism. 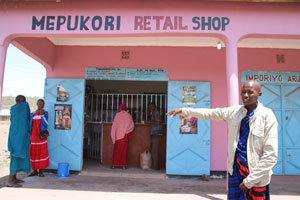 Mepokuri runs a small shop for the daily needs, close to his origin Maasai village. He provides food and other items for his village.

Emmanuel Bonifaz, 24, was supported for 8 years: when we found him, he seemed in a completely hopeless condition. He lived in a run-down shed together with his sick and blind father, and slept on a dirty foam-material on the floor. We sponsored his school attendance and helped him find decent housing. Emmanuel was underestimated by many but he managed to pursue his future step by step. After school, he became independent and bought/sold chicken. He managed to make his living with these activities but he had additional plans. He applied for a start-up capital to buy a three-wheel motorcycle that would carry water and other equipment. Today, he delivers waters into remote slum areas. He has a decent income and his next step is to build a house. We are convinced that he will make his way! 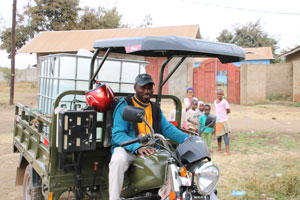 Emmanuel received as start capital a triple wheel motorbike and carries water into the remote areas of his origin slum. He provides fresh water for the people living without running water.

Examples out of almost 100 fromer students which we could rescue from poverty and provide with education, until they can stand on own feet.